Enter another world through the jaws of a giant saltwater crocodile!
This giant crocodile entry is the best example of its kind in the world. Get up close and personal with over 2,500 crocodiles! Experience the feeding tour and the rogue crocodile alley!

Your guided tour showcases some of the largest crocodiles on display in Australia. A personal tour, which includes pictures with the crocodile handlers, talking to the birds and exploring the Park with a guided tour. Learn all about these prehistoric animals who live in the Kimberley and just outside of Broome Western

We had Candy as our guide and she was absolutely FANTASTIC!!!

From hotel pick up/ drop off, to getting us in the door without queuing, but by far the best part was Candy making the animals sing, talk and dance, and making sure we had the best views when it was time to get up close and personal with the crocs!

Amazing Crocodile Experience But So Much More

To be honest, my wife & I were a bit unsure what to do in Broome on our cruise, but for once we made the right choice with the trip to Malcolm Douglas Crocodile & Wildlife Park provided by Broome and Around. Our tour leader from Broome and Around had much experience with the Park and took us to many exhibits before the main presentation that would normally be overlooked by the casual visitor. When the Park naturalist began the presentation, it was not a show, but a serious education, demonstrating how crocodiles survive in the wild. He took us through several different types of crocodiles and alligators and then spent time on several special Park residents who were very interesting. Even after the formal presentation was over, he invited those who wanted to see new wildlife. We were among the last to leave the Park. The Broome and Around leader took extra time to show us Cable Beach even though it wasn't on the itinerary.
This tour was wonderful, and The Park is doing wonderful conservation work in addition to providing a thrilling educational experience. Don't miss it.

Please enable cookies in your browser to place a booking

Please note: After your purchase is confirmed we will email you a confirmation. 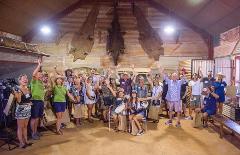